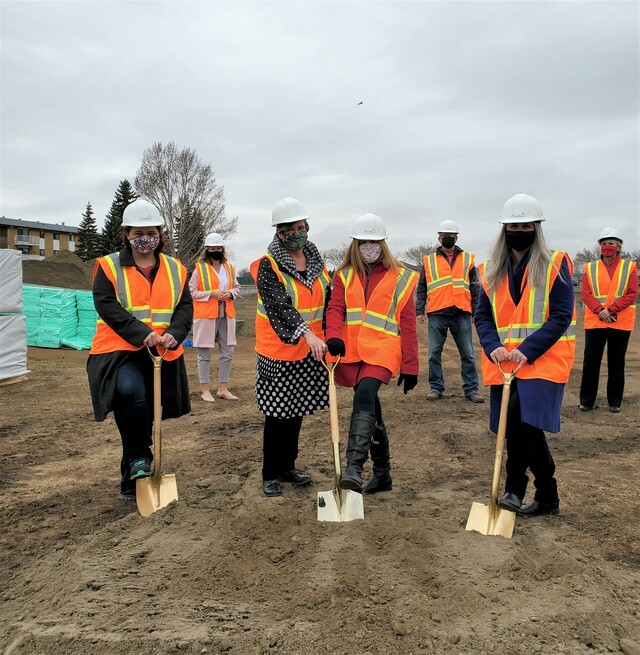 On April 29 representatives from the City of Fort Saskatchewan, Heartland Housing Foundation, Robin Hood Association, and the family of the late Muriel Ross Abdurahman gathered to announce the ground-breaking for a new affordable housing community.

The apartment building will bring 83 units of much needed affordable housing to Fort Saskatchewan, and will feature a unique blend of modular and stick frame construction. The apartments, owned and managed by Heartland Housing Foundation, will incorporate leading-edge energy efficiency technology, making it one of the area’s few net zero buildings.

The new apartments, which will begin accepting applications in May 2022, will be named Muriel Ross Abdurahman Court, in honour of the former mayor of Fort Saskatchewan, area MLA, and tireless public servant.

“We wanted to honour the legacy of Muriel Ross Abdurahman and her commitment to equity, sustainability, and opportunity for all the members of her community,” said Nancy Simmonds, CEO, Heartland Housing Foundation. “We hope that Muriel Ross Abdurahman Court will be a place where future generations of community leaders will grow up in an inclusive and vibrant community.”

The project was made possible in part by a funding pledge in 2018 by the Province of Alberta, with other partnering funders to be announced in the coming months.

The land for the new building, which is located next to Heartland Housing Foundation’s Dr. Turner Lodge, was donated by the City of Fort Saskatchewan.